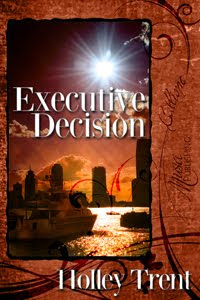 Today we're visiting with Holley Trent, a fellow Musa writer. Holley blogs at http://holleytrent.com, and she's talking about a bit of craft and marketing.
***
Thanks to Nancy for letting me visit, and for the opportunity for a bit of confessing.

“Holley Trent” seems like a perfectly typical name, right?
You can’t tell much from it, though, but you probably assume I’m female (I’ve never met a man named “Holly” or “Holli” or “Hollie” or whatever permutations folks are daydreaming up nowadays).

True. I’m a girl. If you guessed that, you get a gold star (it’s scratch-and-sniff and smells like winning).
“Holley Trent” is my nom de plume. I use a pen name for a few reasons, the first of which is that I spent about ten years doing web writing. I don’t even want to know what kind of hits come up if I were to Google myself right now. What I do know is that I don’t want my romance readers
to search for my name and find some article I wrote five years ago about lace-front wigs or treatments for foot fungus. That’s not sexy.

Second, my real name is really girly and young-sounding. It’s one of those names in which there are NO sixty-year-olds alive who have it. It’s actually a pretty damn good name for a romance writer now that I think about it, but that’s about where the stereotyping ends. I’m neither as chipper as my name sounds nor as cute. My first name is something a lavender unicorn
should have. I fit more surely into the “sturdy workhorse” classification (however, if you’d like to brush my mane I won’t stop you).

Third, I’m a bad, bad girl. Some of my stories have naughty bits, and I know folks back home Google my name every now and then to see what I’m up to. How do I know? Because they find me on Facebook and then tell me everything about me they have no reason to know. Eventually, someone in the know will slip up and other people will find out that Holley Trent = Sturdy Workhorse. I’d like some time to tighten up my Facebook privacy settings before that happens (which seems to require a manual the size of a Manhattan phone book to accomplish).

Last, I have plans to write in other genres. My urban fantasy stories will probably go under my Holley Trent name, but the young adult ones will need to be separated. I don’t want some poor kid to get confused and stumble into some literary raunch.

And if you’re wondering, “Holley” is spelled that way for a reason. If you ever meet me in person, I’ll tell you why. In the meantime, you can practice spelling it by staring at the cover my debut Musa Publishing release Executive Decision. (That was a shameless plug in case you’re
wondering.)

Headhunting has never been so fun!

Secretary Ellen works in a headhunting office that handles most of its business by phone. When one job candidate, a marine engineer named Christian, drives to Edenton to assess the firm’s legitimacy, he recognizes Ellen from something she thought was well in her past. When the sexual magnetism between Ellen and Christian boils over on the waterfront, their tryst leaves them both feeling unsatisfied.
Christian sees Ellen as the mermaid of his fantasies and wants to build on their chance encounter, but does Ellen want to be caught in his net or will she swim off to get her satisfaction elsewhere?

Find it at Executive Decision at Musa Publishing.
http://musapublishing.com/index.php?main_page=product_info&cPath=4&products_id=284
or at other fine eRetailers. Find *me* at http://holleytrent.com/blog .

Hi, Holley. ;) Love live pen names! I have two in big use now and four altogether. Whew. But it's necessary for some of the reasons you stated.

It's always interesting to me why (or why not) authors choose pen names. Of course, now I want to meet you in person and find out your real name and read about foot fungus ... well, maybe not the last part. ;)

I really, really hope some of the stuff I wrote has fallen off the search engines by now.

I write naughty bits, too! They are my favorite parts... Best of luck with your writing.

Holley hits on some of the reasons I use a pen name as well. My day job is very conservative and some of my stories have those lovely naughty bits.
I'd rather not have the conservative portion of my client base declining to use my services because of some of that writing. After all, the day job still pays the bills.

What fun! I decided on a pen name, too, just because I hope to eventually get some of my PBs published and use my actual name for those. Unfortunately, I don't have the skill to write naughty. I'm very curious now, though, about your real name.

Let me know what you think! I think it'll be the best buck you'll spend all week!

I use a pen name partly because an impossible to pronounce or spell French last name and partly because I didn't want to mix up my day-job career with my writing career. Now, ive decided to use a diminutive of my pen name, which is pretty comical, because i don't like people shortening to Liz on their own! Loved the blog on using a pen name!

Thanks for sharing, Holley. Good luck with Executive Decision.