Drawing Out The Dragons - Superstars 2012 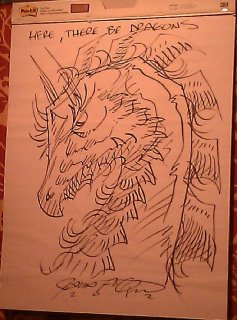 There are dragons out there if we just believe and search for them.

Yet again, this year's Superstars Writing Seminar (http://superstarswritingseminar.com)  exceeded expectations. Presenters included: Kevin J. Anderson, Rebecca Moesta, Eric Flint, Brandon Sanderson, David Farland/ Wolverton, Dean Wesley Smith, and James Owen. James Owen drew the dragon pictured above as part of his presentation - Drawing Out The Dragons. Each year, one presentation inspires awe. The first year, 2010, for me the title went to Brandon and how he was chosen to complete the Wheel of Time series for Robert Jordon. There was no doubt that last year's title went to Tracy Hickman's story about how our writing touches our readers. You can hear that story on the Superstars website. James Owen stole the title this year.

A little about James for those of you who don't know him. He started his writing career as a comic book artist in middle school. His life has been punctuated by moments where most people would give up. He never did. At eleven he was diagnosed with a rare blood disease (read this as "the doctors didn't know what was wrong with him but he was dying.") and not expected to survive. He found the will to do so. As an adult, when it looked like success had finally found him, he was in a car accident. The doctors told him that he was lucky because he'd only injured his right hand (you know, the one he drew with), and that even though that hand would never be 100%, he'd be fine unless he needed his hand for his job. James said that he did because he was a comic book artist. In response, the doctor replied, "Not anymore."

James is a comic book artist.

He has more courage than anyone I know. I hope that if I'm ever faced with some of the choices the was I will have the internal strength to make the choices he did to stay true to what he wanted and not compromise them for the thing he needed at that moment.

Here's the thing: writing is tough. It's easy to give up or compromise.

Indie publishing (whether e-publishing or self-publishing) changed the writing market. Writers can directly interact with readers without the Big 6 traditional publishers. Whether this is a good thing or not is a different issue. What was true before the e-pub world continues to be true - No one can make you an international best seller. Only you can do that.

I will draw out the dragons even when everyone else can't see that's what I'm doing.

James Owen can be found at http://www.coppervaleinternational.com and http://coppervale.livejournal.com
Posted by Unknown at 6:00 AM

You can get James the ebook verisons (Pdf, mobi, epub) of Drawing Out The Dragons, which that presentation was based on, for free, from James' website. I've had a chance to read an advanced copy of second book in The Meditations trilogy (Dragons was the first), called The Barbizon Diaries. The stories are even more triumphant because they come from a darker place - it's everything Dragons was and so much more.

Here,s the link to the free ebook of Drawing Out The Dragons - http://coppervaleinternational.com/make-today-extraordinary/

Don't forget that a room full of writers jumped to their feet in a standing ovation as soon as he finished his presentation. Personally, I've never seen that happen before. The man carries an inspiring air about him that's not just about presentation; it's intrinsic.

It definately was awe inspiring. And James is such a wonderful person too.