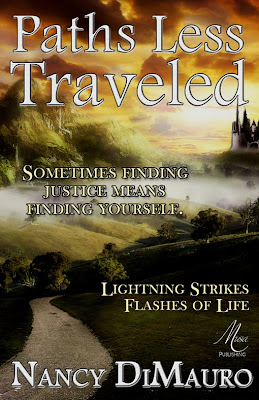 Some women walk their own paths through the ages, even when mayhem follows. Follow two of these women as they each walk the Paths Less Traveled.


In “Lightning Strikes”, Falcon, a disinherited princess, wants to be the king’s spy. The theft of a prize stallion is her chance.  But when her best friend stands accused, far more than her dreams are at risk. Falcon races to catch a thief before fatal vengeance falls on an innocent man.


Worlds away, Psyonics Corporation controls all paranormals and psychics in “Flashes of Life.” Its highest-testing but still latent psychic, Vonna  accepts an assignment with the D.C. police to avoid the company’s breeding program. The company works to ensure failure in her first case – a homicide.  If she can’t unlock her talents, a murderer will go free and she’ll be consigned to slavery.


Excerpt from Flashes of Life:


A blonde female officer growled as I bent to slide under the yellow police tape. Her aura flicked with the burnt amber of authority and a hint of annoyance. Her jaw snapped shut as she took in my white leather outfit and gloves, the outward sign of my other than human status. Silver surprise limed her before changing to puce and signaling her disgust. Her gaze flicked to the emblem bearing the Greek letter Psi on my chest, and then skittered away.


"A pleasure to meet you Officer Williams. I'm Vonna Sinya, the assigned Psionic . Detective Muller is waiting for me."
Williams tapped her commlink and turned her back.


Charlie-short for charlatan.
The word burned across my skin. It’s what the insens called psychics despite the scientific proof of our existence. I drove my fingernails into my palms. The white leather gloves only transferred the barest pressure to my hand. Recently graduated from Psy Corp, the gloves were a new addition to my wardrobe.


The gloves chaffed.
Muller strode briskly toward me. "Let her pass," he said as he approached. "Ms. Sinya, nice to meet you." He looked down at his hand, and then dusted it off on his pants before extending it.


Touching a psychic was the equivalent of offering your throat to a hungry vampire. The corners of his eyes tightened making the three crow's feet under each one stand out from his skin. He wasn't as sanguine about his offer as he'd like me to believe. He knew psychics were a threat even when smothered in leather. Maybe especially then. Still, the alpha dog was offering me a place in the pack and hoping I didn't challenge his authority.
I pasted a smile on and grasped his hand. "It's a pleasure to meet you. Please call me, Vonna."


"Rick." He lifted the tape. "First murder?"
I ducked under the line separating cops from little people. "My first crime scene."


He shifted a step back. "Why do I get the newbies?"
"Because you're willing to shake hands with us?"


The change in his mood was so rapid that his bark of laughter and bright blue slash of humor startled me. "That may be it." He walked toward the house. His pace was half the speed of his departure. "Main talent?"
A rash of heat flamed across my features. "We don't know."


Muller stopped and turned. "The Company does not let unknown psionics wander the streets, much less join active investigations. It's not like I just asked your favorite sexual position."
The Company was a pejorative term for Psy Corp. I'd heard it referred to an ancient song about owing your soul to the Company you worked for. If so, it wasn't a misnomer.


"I'm a thirty-seven."
"Excuse me?" Muller went pale in the flashing blue lights.

Despite the pit in my stomach at what might await me in the house, I smiled. "Just realize what you'd given your hand to?"

From Barnes and Noble


4.0 out of 5 stars Two engaging and very different short stories.,
By:
Matt James - See all my reviews
This review is from: Paths Less Traveled (Kindle Edition)
Each of the two short stories in this book is gripping and involving in its own way.

The first story, "Flashes of Light", is a dark and gritty science fiction tale set in the future. The heroine, Vonna, is a psychic working for Psyonics Corporation who must prove herself capable of solving a grisly murder to avoid being forced into a breeding programme. The way her feelings and psychic visions are portrayed is vivid and the writer paints a stark picture in your mind.

The second story is written from the perspective of Falcon, a young princess who must solve the theft of the king's prize horse before her best friend is wrongly executed for the crime. It gives a glimpse of a fascinating world which I would love to read more about.

Nancy DiMauro creates realistic characters and scenes which capture the imagination. I found myself empathising the herione in each story and feeling the atmosphere of each scene - signs of a good writer. I thoroughly recommend this book.


Nancy Dimauro's 'Paths Less Traveled is a nice pair of compact reads under one cover. The sci-fi tale, 'Flashes of Life' comes first, describing a post WWIV setting where Vonna, a woman with unsettling Psy-powers fights to avoid enforced breeding programs, opting for public service in the police force instead, but she is despised for what she is. Her psionic gifts, a biological misfire from radiation poisoning in wartime are viewed as an asset, but far too dangerous to allow for freedom of movement for Sensates such as her. The balance between acceptance as a human being and the treatment she receives as 'other' add a poignant touch to Vonna'a predicament. Her attempt to solve a murder is thwarted by even her own company; but a brave man takes a chance on her ability, and the twists and turns of a well crafted tale are very worthwhile. The story was a good read over all, quite dark and gritty. I'd like to read more of Vonna's adventures.

The second tale, 'Lightning Strikes' leans more toward a fantasy flavor. Falcon, is the King's stepchild and serves as his personal assistant. She must solve the mystery of a missing horse before her friend is sentenced to death. Falcon begins a desperate race to ward off ugly politics for the King, find the culprit, and save an innocent from imprisonment for a crime he did not commit. The many hurdles Falcon faced down with sheer determination made for good reading. I'm looking forward to reading more from Ms Dimauro.

All in all, Paths Less Traveled delivers two well written stories that will make you stop and consider what it is to be. And if you're looking for heroines with depth and spine, this book is for you. A one-two punch of a read.


This pair of stories are indeed very different. "Flashes of Life" is a grim cop drama set in the distant future where psionics walk a line between valuable commodity and dangerous detainees of the state. "Lightning Strikes" takes place in a uniquely drawn fantasy setting. However, the heroines of both stories are seeking their place in their respective worlds--a place that both defines their identities and confirms who they are deep inside. Both young women have the talent to succeed, but both are faced with roadblocks determined to push them right back into subjection.

For this reason, the story pairing worked really well for me as each tale provided commentary on the other. Vonna and Falcon are fresh and inexperienced but determined to see that justice is done and that the innocent are protected. I really liked them both.

I will agree with previous reviewers that I would LOVE to see more of each of these worlds and these characters and hope DiMauro will come back to this wonderful ground.