Strike While The Iron Is Hot - The Jack Gorman Project 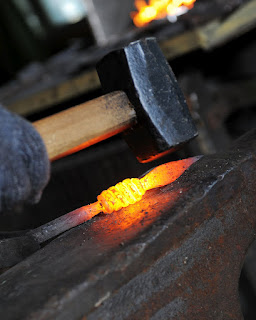 The Jack Gorman Project, an anthology coming from Musa Publishing in July, 2012, was born out of a Dog End dinner at the World Fantasy Conference in October, 2011. For those of you who haven't attended a large conference, the Dog End Party is what happens the night the conference officially closes, and while most attendees are still around. At World Fantasy this includes parties to consume the last of the Hospitality Suite's, and anyone else's, for that matter, food and drink so it doesn't get thrown out or dragged back home.

So, I went to dinner with 14 women, some of which I knew and some I met as others invited them, that night. Critical to this story is Celina Summers, the chief editor and head goddess at Musa was part of the group.

During dinner, Goldeen Owgawa told an amazingly funny story. You'll have to read the anthology (and check my updates here on the blog) to find out more about that story. But it probably took a good 15 minutes before we stopped laughing. When Celina could finally draw a breath said she hadn't laughed that hard in a while, and the story really should be published. A moment later, she said, "Oh the heck with it. I'm a publisher. I'm going to publish it. We're going to do an anthology."

The Jack Gorman Project was born.

Everyone at the table was invited to participate. Not submit. But actually participate in a published anthology.

Celina agreed to be the editor. So, the head of a new publishing house had not just offered to publish us, but also to edit us to her standards. Talk about an amazing opportunity. She then gave us a deadline for submissions.

I struggled with my day job, family and other writing commitments and got a story, Through The Stone Circle, submitted.
What surprises me is not that the opportunity arose, but that of the 12 writers (one of the women was an editor) at the dinner only six of us submitted.

Six people (50%) turned away from a guaranteed writing contract.

I'm not telling you this story to criticize the women who didn't submit. I understand that life intervenes, and often yanks us to where it wants us to be rather than where we planned. After all, that's what life's all about. I'm in the middle of one of those life yanks now. But I digress . . .

I'm telling you this story because writing professionally is often about taking advantages of opportunities that "fall" into your lap or "striking while the iron is hot" to borrow an old phrase. I quoted "fall" because often those opportunities exist because of steps you've taken in advance. For me, those steps included attending the Superstars Writing Seminar, meeting Colette Vernon there, staying in touch with her through the SWS Facebook page and Fictorians, attending World Fantasy and rooming with Colette. She, as I've mentioned before, introduced me to Celina at World Fantasy.

Whether in writing or in any other aspect of your life, when at all humanly possible take advantage of the opportunities that come knocking. You never know where they might lead.

And stay tuned for more about The Jack Gormon Project coming from Musa Publishing on July 20, 2012.

You are right about seizing opportunities, Nancy. Whenever I hear people say they never have any luck, it makes me think they may have missed it when it came calling.

Lovely to hear this story and the sequence of events that got you 'in the right place and the right time' (with the right publisher)! :)

What a marvelous journey! Thanks for sharing.

What I meant to say was that I think it's worth mentioning that one of those women, my mother, writes software code, not fiction. ;)

But yes, it's important to at least recognize the opportunities when they present themselves, as they do not always look the same.

Goldeen - she's the one I called an "editor" because I remembered that she edited your work and not the other day job. She said at dinner that she wouldn't be submitting a story. Sorry that I messed up her job for the post.