The Joy of Discovery 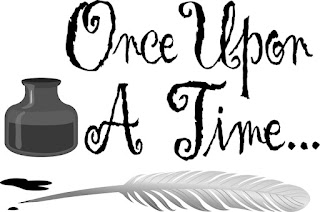 If you asked me which moment I liked the best, the one where I get to type "The End" and the one where I confront the blank screen for the first time, I wouldn't hesitate in answering. They're both amazing moments,  but the moment of creation,  when that first word hits the screen, is a just shy of ecstasy.

There's very few things I enjoy more than opening a book for the first time. The world is full of possibility. Anticipation of a really good book has raised goose bumps - no joke. You remember that moment when the prequel to a popular movie franchise came out? The theme music started. I practically vibrated with excitement. The event was so visceral. While the movie ultimately disappointed, for that one moment, the moment of creation when the music started, anything could happen. Hope and possibility ruled. Starting a story is like that for me.

I'm in an interesting place right now in my writing. I have two completed novels (King's Falcon and New Bohemia: Just One Night) that are in various stages of editing, and as of Sunday, I just started writing my next novel - Schrodinger Effect. It's actually why this post is late. I've been visiting Vonna's world.

My resistance to outlining is that the one time I tried it, the whole process took the joy of discovery out of writing for me. But Vonna's world, and her stories are too complicated for me to completely discovery write. So, for this one I have an outline of sorts with some nice big wholes that I can discovery write in.

If you haven't read  Flashes of Life from my Paths Less Traveled  short story collection, shame on you. Seriously though, the new novel features Vonna, the psychic detective from that story. One of the things I find fascinating about Vonna is the quirks in her psychic abilities. While she's an empathy, she doesn't feel emotion, she sees is as color around the person.

The connection between colors and emotion goes back a long way. People are green with envy. We associate different meanings with the colors of roses- red for love, white for friendship, and so on. 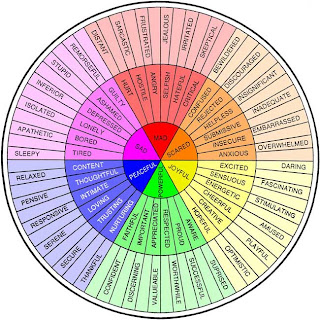 Robert Pulchik , a psychologist, used a color wheel to help categorize intensities of what he considered to be the eight primary emotions - anger, fear, sadness, disgust, surprise, curiosity,  acceptance and joy. People have since built on that model to take into account additional emotions. The wheel to the right is an example of an emotion color wheel.

Vonna's a bit more complicated than that. Her ability to see emotion is, essentially, her 6th sense or, if I were writing a different kind of story, her superpower.  I have to thank my editor at Musa Publishing who pointed out that Vonna would notice the emotional colors as a non-gifted person would notice hair color. In other words . . . always. I realized that to sustain her gift/curse over the course of a novel, I'd have to account for gradients of emotion that none of the existing wheels did. As a result in preparing to write about Vonna's next murder investigation, I spent quite a bit of time coming up with the colors in her world. Her color wheel doesn't match up to Pulchik's or even the one above.

Similar emotions fall into the same primary color, except when the don't. For example for Vonna:

Love is spring green;
Adoration is Aqua;
Fondness  is Lavender; and
Like/ liking is Lavender Blush.

We're crossing primary colors (green,. blue and red) for emotions that are somewhat similar in nature. Also, because we don't have enough words to encompass all the gradients of emotion, Vonna had to make up her own descriptions of the colors she saw, and the more complicated the emotion, the more elaborate the color. As an example, "Trust" is sunset teal because I wanted to show that "trust" as an emotion was a combination of many lesser emotions and, thus many primary colors joining together.

So for the moment, I'm in the grip of a new love. So, please forgive me if I'm so wrapped up that I forget the outside world. I'll let you know how it goes. 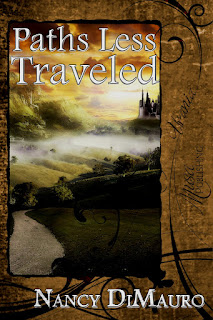