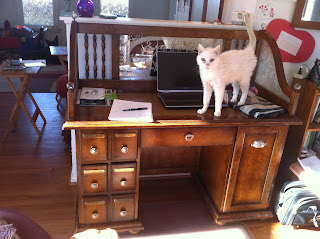 So, as some of you might have seen from my Twitter feed, Benedict, my husband’s white cat, shared my writing desk with me for many years. We lost him about two weeks ago now and this is the first I’ve been able to write about it.


My friend Sioux and I found Benedict in a crate at a puppy farm. The story we were told was that the owner of the store had been driving home when he saw the car in front of him pull to the side of a bridge, and throw something over. He climbed down the embankment and fished a bag of kittens out of the river. Only Benedict survived.  The owner was looking for a good home to take him for free. Now, I don’t know if the story was true, but we left with that scrawny white kitten. Benedict (named after the male lead in Shakespeare’s Much Ado About Nothing, became my then boyfriend’s now husband’s graduation present.


For the first ten or twelve years of his life we barely saw Benedict. My Dad wanted to name him “Flash” because all you’d usually see (if anything) was a flash of white fur as he ran past. Despite being almost drowned in a bag, Ben loved hiding in any bag or box he could find. He was really good at it. In those early days, it might be a month or more between sightings. About once a year, Benedict would come out when everyone else was sleeping, demand a few pats from Matt, and then vanish back into his hidey-hole.


But a strange thing happened about six years ago. Ben started hanging with us more often. He demanded attention. First, once a month, then once a week, and finally, every day.  While Matt complained that Ben was changing their deal, I know Matt was happy that Benedict had finally gotten over his trauma. 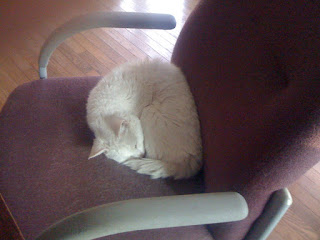 In the last four years, Benedict claimed the right side of my desk as his spot. I’ve had him change the language function on my computer. That was fun to correct. In February, he posted one of the blogs on this site. I had to spend two hours figuring out how to recall the post so I could finalize it.  I can’t even tell you the number of times I had to type under his belly to write. Matt laughed as I ranted at the cat to move. Being a cat, Benedict moved when he’d decided he’d had enough love. I think he spent the last few years of his life making up for the affection he’d lost by being afraid of people.


Eighteen years is a long time for a male cat. He started slowing down about two years ago. Always less than ten pounds, he dropped to about eight pounds. A twenty percent loss of body weight is a significant thing. I put a towel on his spot so he would be more comfortable. We gave him his own bowl of water on my desk so he didn’t have to compete with the other cats and the two dogs. He stopped eating dry cat food. We switched him to wet. Mystery, one of our other cats, bullied him out of the wet cat food. Benedict got fed separately so he could eat. He regained some of the weight. Not everything went smoothly though. Benedict started having litter box avoidance issues. Joy. We dealt with it.


At the end of April, Matt and I were heading out to Las Vegas for our 15th wedding anniversary and the Superstars Writing Seminar. But it was clear that Benedict wasn’t doing well. I took him to the vet three days before we left. She thought he might be having thyroid issues. So, we tested him, and did IV fluids and antibiotics. He seemed to be doing better.


Matt came home on a Sunday since he wasn’t attending the seminar. He called me on Wednesday to tell me Benedict had stopped eating and drinking the day before and was gone. So, I didn’t even get to say “bye.”


I can’t work at my desk.  His absence is too noticeable, too raw.  I know the time will come when I start writing at that desk again. But it won’t be the same. Goodbye, Ben Ben. 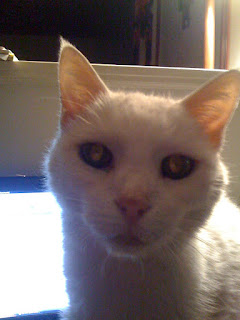 So sorry to hear of your loss, Nancy. It's always a strange absence, and having had a similar loss this year, I can entirely sympathize. At least you gave Benedict and amazing home and took wonderful care of him, and it sounds very much like he was a wonderful part of your family.