To restore Daphne to her nymph form, Apollo must bargain with treacherous Hades, but Death may demand too high a price. 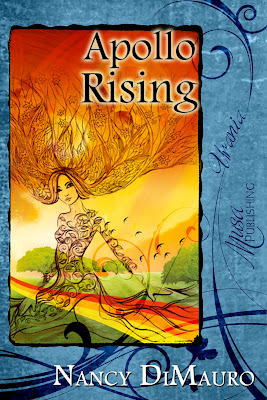 Shot by a golden arrow, Apollo has only truly loved Daphne. He visits her each eclipse, and longs for reunion. He seeks the Fates’s advice and learns he may finally restore Daphne to her true water nymph form by enlisting other gods’ assistance.
If Apollo fails Daphne will be lost to him forever. To regain Daphne’s soul, Apollo must deal with the devil, King of the Underworld.  Love-torn and treacherous, Hades would slay the pantheon to remain with his wife for the full year. Apollo’s quest might just give Hades the leverage he needs to do so.
Will Pheobus Apollo surrender the sun to try to reclaim love? Can he break Daphne’s curse or will his attempts destroy her forever? Will she still love him after millennia as a soulless tree? With the end of the quest see Apollo rising, or in sunset?
Excerpt:
Darkness cloaked the woods though Nyx remained on the other side of the world. The eclipse was here. A thin whinny and the stamp of hooves announced Apollo’s arrival. If I’d still had a heart, it would have stuttered at the sight of him even after all these eons. Well-muscled and bronze-skinned, he glowed slightly in the unnatural night.
“Daphne.” The word, part-benediction, part-exaltation, caressed my bark. “My Daphne.”
Cupid’s magic still rode us. Apollo’s arms closed around my trunk though he could no longer encircle me. I lowered my branches to enclose him in their shelter.
“Mercury says hi.” He pulled a vial of what looked like olive oil from his tunic. “He said that if I was going to wax my wood, I might need this.” His smile was self-deprecating as it put it back. “I swear he gets crasser with each passing age.”
Apollo laughed then. Our one-sided conversations never lasted long. Then again, neither did the eclipses. He leaned back against my trunk, his limbs nestled in my roots. Fingers traced the cracks in my bark.
"My love,” he sighed. “Shall I sing for you?”
He walked to his chariot and withdrew his lyre. True to his word, it was fashioned from laurel wood. Returning to his seat at my base, he strummed absently. His voice warmed me. Heart sap flowed to my branches.
I felt Apollo stiffen. “What are you doing here?”
My consciousness focused on where his gaze went. Cupid reclined against an oak. The tree was younger than I. But then, the entire forest was now. Men choked off my father’s stream. I could do nothing but watch him dwindle and eventually return to the embrace of the Earth Mother. The forest fell with him, save me. Apollo’s blessing kept me safe from man’s privations. The Greek gods soared to prominence, only to fall to the Christian gods. The Greek gods had recently resurged because men, dissatisfied with the world they’d created, looked to the past for inspiration.
My leaves rustled at Cupid. A small smile carved up the corners of his mouth.
“Admit it, Apollo. My bow is mightier than yours. My arrows more true,” Cupid said.
“Go away. I have precious little time with Daphne because of you. Leave us to enjoy what we have.” Apollo put his lyre down. His hand rested on my trunk.
“Psyche. . .” Cupid stared at his feet. “Look, I’m sorry.”
Apollo’s laugh had no humor. His bile soured the breeze. “A bit late for that don’t you think?”
“I was a child, and you, you were an ass.”
“Not endearing yourself.”
Cupid rolled his eyes. “I’m trying. Look.” He unslung his bow.
Apollo tensed. Between one breath and another, he was beside his chariot, his own bow drawn. “Haven’t you caused enough harm with that toy?”
“And I can fix it the same way.” Cupid drew two arrows from his quiver. Two lead arrows.
“Would you surrender Psyche merely because loving her was difficult or brought you pain?”
Cupid dropped the arrows back into his quiver. “No.” He held a hand out to his half-brother. "For what it’s worth, I am truly sorry.”
“Then figure out how to break Peneas’s cures. Help me free Daphne.” Apollo grasped Cupid’s forearm.
“I will.” He inclined his head to me before flying from the clearing.
A sliver of light struck Apollo’s chariot. His steeds pawed the ground and jingled their harnesses anxious to be airborne again. The eclipse was over.
* * * *


Nancy DiMauro takes you on a fascinating ride of romance and Greek mythology all in one, as you follow Apollo on his journey to return his lost love, Daphne, to his side. Engaging the aid of Alex Winters in his quest, together he hopes they will discover how he can free Daphne from her prison. If you love Greek mythology and romance alike, then this is the book for you.